Click on the publication below to see a sample issue. 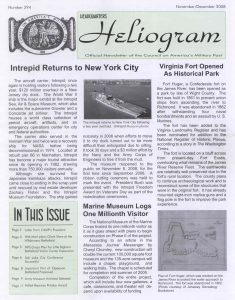 The Headquarters Heliogram is the official newsletter of the Council on America’s Military Past. It provides current information on historic preservation activities from around the world.

Subscription to the Headquarters Heliogram is included in the membership and cannot be ordered separately.

The Journal of America’s Military Past
Formerly Periodical

The Journal is CAMP’s official journal and forum for articles on historical installations and military biography. This fully illustrated and footnoted publication contains in-depth monographs on military history. 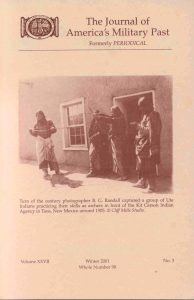 NEW: Now available for download are a listing of articles from Vol. 1 to date and an index of authors and subjects. Click on the links below for each.

The Journal of America’s Military Past welcomes new authors, especially graduate students or first-time authors and we are always in search of volunteers to write book reviews. You do not have to be a member of CAMP to write for us. Potential authors should click here to learn more about the Journal format and style. For additional information or contact the editor send message to EditorJamp@yahoo.com.

Current and Next Issue Articles

Currently in Issue 136 of JAMP

When CAMP was originally formed, one of its main focuses was abandoned military outposts of the Southwest. In keeping with that spirit, “Fort Leaton, Texas” by Vernon Yates, discusses this outpost on the Texas-Mexican border. Originally dating back to the 1830’s, Fort Leaton was a trading post, county seat and quasi-military post controlling trade in the Southwest. Abandoned for many years, it is now restored and open to the public.

“Two Accounts of the 361st Infantry Regiment in World War I,” by James Robbins Jewell, discusses the role of censorship in information that was or was not sent back from the front. In previous wars, soldiers sent candid letters back from the front lines showing the good and bad. The First World War was the first attempt by the U.S. military to censor personal letters, thus limiting what the civilian population saw from the soldier’s point of view.

Dr. Harold E. Raugh, Jr. is the historian of the V Corps. His article, “A History of the U.S. Army V Corps” recounts the history of the formation from its formation in the battles of the First World War until its recent deactivation. Dr. Raugh discusses the operational history, commanders, and organization – information available from the V Corps archives.

Upcoming in Issue 137 of JAMP

In “The Bear Republic Heads East,” Brendan Harris examines the role of California troops in the Union army during the Civil War. Although not large, this unit of California cavalry fought as part of a Massachusetts regiment for the duration of the war, before heading back to the West Coast. While individual Californians may have enlisted to fight in the eastern campaigns, this was the only California unit to serve east of the Mississippi River. The author examines the soldiers’ overriding desire to preserve the Union.

Following up on the theme of Civil War service, Richard Gardiner, P. Michael Jones, and Daniel Bellware examine the origins of Memorial/Decoration Day. “The Emergence and Evolution of Memorial Day,” discusses how the holiday came to be. While the traditional history says that General John Logan originated Decoration Day, this article suggests that the holiday predates his efforts.

The third article, “On Point for the Relief of Khe Sanh,” by Joe Abodeely, offers a new perspective on the relief of the U.S. Marines under siege in Khe Sanh during the Tet Offensive of 1968. Relying on his journals and photos, retired Colonel Abodeely provides a first-hand perspective on this significant military event.

The following books are available for review by CAMP members only. They should be requested from the Journal of America’s Military Past’s book review editor, Roger Cunningham, whose email address is cunninghamroger@hotmail.com. Reviews should be submitted as an email attachment to the same address within 90 days and follow the format used in the Post Library section of the most current issue of the Journal of America’s Military Past. Reviews will be edited before they are published. Reviewers will be afforded the opportunity to approve reviews receiving more than minor correction.

Fry, Zachary A. A Republic in the Ranks: Loyalty and Dissent in the Army of the Potomac. Chapel Hill, University of North Carolina Press, 2020.