On April 27, 15 energetic CAMPers met at the Homewood Suites to begin our trek around Galveston. The opening reception in the Hotel lobby was well attended. The food was good, and the company was warm and inviting. President Ann Todd greeted everyone, and Conference Organizer Bridget Hart explained the schedule for the week. It would keep us all very busy. The unusual thing about Galveston is that, unlike most pre-pandemic CAMP meetings, we did not begin at sunrise. Since the pandemic most of the museums don’t open until 10 am. The earliest we departed from the hotel was 8:45!!

Our first stop was the Galveston Naval Museum. We experienced the actual living space aboard a WWII destroyer and submarine. The destroyer escort USS Stewart conducted over 30 missions in the North Atlantic. It is currently undergoing restoration, primarily by volunteers, due to damage from Hurricane Ike in 2008. The submarine, USS Cavalla, carried out six war patrols and received the Presidential Unit Citation for sinking the Japanese carrier Shokaku.

Robert Bluthardt, the director of the Fort Concho Museum and a long-time CAMP member, was our first speaker. He spoke on “Preserving a Lifetime’s Work: The McChristian Collection of the Frontier Soldier at Fort Concho.” Doug McChristian spent 35 years with the National Park Service. He dedicated his life to collecting soldiers’ uniforms and equipment during that time. His dozens of articles and many books on these times remain the standard reference tool for historians, living history re-enactors, and fans of the west. Fort Concho has the entire collection of over 1800 artifacts, 800 books, and many running feet of research material and other items preserved as both a legacy to Doug’s passion and a resource to be displayed, shared, and protected. Fort Concho is also the depository for CAMP co-founder Herb Hart’s library and CAMP archives.

CAMP Life Member Ed Cotham, our second speaker, discussed one of the most important events in Galveston history, the issuance by Major General Gordon Granger of General Order No 3 (the Juneteenth Order) on June 19, 1865, one of the most famous orders of the Civil War.

In his presentation based on his book, Juneteenth: The Story Behind the Celebration, Cotham discussed some of the myths surrounding the historical event and the Order’s true importance and continuing legacy. After lunch, Cotham led the group on a walking tour of the Strand in downtown Galveston pointing out many sites important to the Battle of Galveston. We met Mr. Samuel Collins III, historian and co-founder of the Juneteenth Legacy Project on the tour. A mural titled Absolute Equality by Reginald C. Adams is located at the site where the Juneteenth Order was read. As Collins told the group, “this story is too important to be kept a secret, and it’s too important to the healing of America and to the repair work that needs to be done so that we can be a better country going forward.”

We took a ferry to Bolivar across the Galveston bay to Fort Travis. Construction began on Fort Travis in 1898 as part of the Endicott System of seacoast fortifications. Four batteries remain intact: Battery Davis, Ernst, Kimble, and 236. Judith Rinks and Ralph Stenzel gave us a tour of two of the batteries, Kimble and 236. Construction on Battery Kimble began in 1917 and was completed in April 1922. It held twelve-inch guns with a range of 17 miles.

Shortly after World War II, the battery was abandoned, and its guns sold for scrap. Battery 236 contained two long-range six-inch guns connected by an earth and concrete casement, which contained a power plant, magazines, fire control facilities, and crew quarters. Designed to defend Galveston Harbor from minelayers and submarines, it was abandoned shortly after the end of World War II.

Friday morning found us at the Lone Star Flight Museum. The museum displays over 40 significant aircraft and over 1500 artifacts that demonstrate the quantum leap in technology from gliders to space over the past century. All but three of their planes are airworthy.

Next was the San Jacinto Museum of History. Between the battlefield tour and the museum exhibits, we gained a good understanding of how the battle in the War of Texas Independence progressed and the people who participated.

On Friday, our last stop was at Camp Wallace and a tour led by Ralph Stenzel. Designed as a training facility for antiaircraft units in World War II, it opened on February 1, 1941. It is named after Colonel Elmer J. Wallace of the 59th Coast Artillery who was fatally wounded in the Meuse-Argonne offensive of 1918. In April 1944 it was transferred to the U.S. Navy as a naval training and distribution center. It was declared surplus in 1946. Efforts are underway to reclaim some of the building foundations from overgrowth. Signage shares the fascinating story of this site..

On Saturday, we visited The Bryan Museum, a collection of historical artifacts, documents, and artworks of the American West assembled by J. P. and Mary Jon Bryan. It spans over 12,000 years, from ancient Native American cultural artifacts to modern twenty-first-century objects.

The collection is housed in what was the Galveston Orphans Home, constructed in 1898. The building was partially destroyed in the 1900 Hurricane, rebuilt to its current edifice in 1902, and continued to serve as an orphanage until 1984. The building had a second life as a private home until it was sold to J.P Bryan for the museum. It was restored and opened as The Bryan Museum in 2015.

Our final conference afternoon visited the Galveston Historic Seaport Museum. This exhibit, “Ship to Shore,” details the experience of immigrants to Texas from the long sea voyage to the hustle of the city in the 1880s. Galveston was one of the busiest ports and booming cities in the United States and was known as the “Ellis Island of the South.”

As we exited the exhibit, CAMP President Ann Todd discussed the sails and rigging of the Tall Ship Elissa, one of only three remaining seaworthy square sail tall ships in existence. The group then went onboard and toured the ship. We finished just in time to set sail on a Harbor Cruise through Galveston Bay. In addition to the busy harbor, we saw dolphins at play and attempted to assist a stranded pleasure craft.

Our closing dinner and Annual Meeting was held at the Galveston VFW Hall, which was also the site of our first presentations. CAMP Secretary Marylou Gjernes provided a report on the Board Meeting and announced the election results. All four directors with expiring terms were re-elected: Gordon Bliss, Dale Floyd, Mark Magnussen, and Ann Todd.

Following a delicious meal prepared by the Commander of the VFW Hall, Mr. Eric Brossard, the Curator of The Bryan Museum, talked about the museum collection and answered many of our questions from the morning’s tour. He also brought a prized weapon from the collection for us to see up close. Thus brought our fun and educational meeting in Galveston to a close. See you next time! 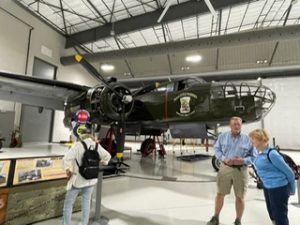 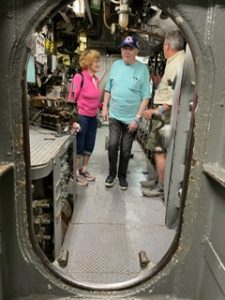 Below: Monument at San Jacinto Battlefield; Conference participants in front of the Juneteenth Mural; boarding the USS Stewart at the Galveston Naval Museum. 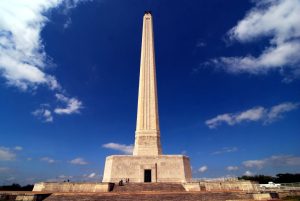 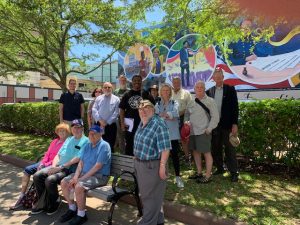 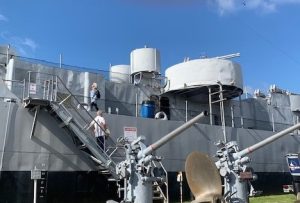